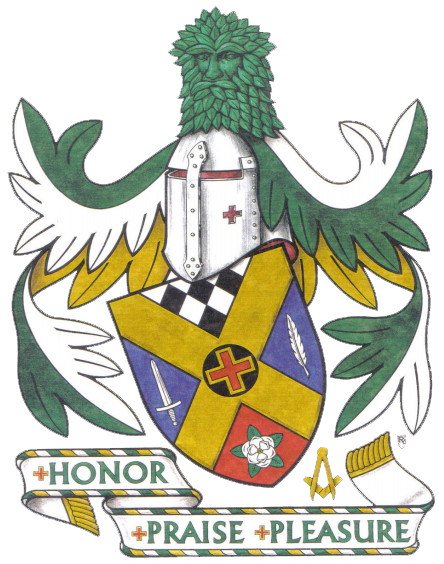 An achievement or armorial/complete achievement (or "full (heraldic) achievement") in heraldry is a full display of all the heraldic components to which the bearer of a coat of arms is entitled. It can include not only the coat of arms itself, but also: the crest; a torse; mantling; the appropriate helm, coronet or crown; the supporters (who may or may not be depicted on a compartment); the motto; and in some cases the symbol of an order.

The blazon of the armorial achievement featured on the cover and above is as follows:

ARMS
Azure, a saltire Or charged at fess point with a pellet Sable charged with a cross humette Gules fimbriated Or, between in dexter flank a sword erect Argent and in sinister flank a quill pen in pale point to base Argent, in chief on a field Argent four lozenges throughout three and one Sable, and in base on a field Gules a magnolia blossom of nine petals argent seeded Or leaved of five Vert.

CREST
On a helm a Green Man's Head of magnolia leaves Vert.

MOTTO
Honor Praise Pleasure
Not mentioned in the blazon but almost always drawn in a full achievement is the "mantling." This is the cloth used to shade the wearer from the sun. It is sometimes drawn shredded and sometimes drawn whole. In this case, the mantling is drawn shredded to resemble magnolia leaves. The artist's rendering here would be blazoned per pale Argent and Vert doubled Or.

Also included as decoration is a masonic square and compass device. None of the working tools of Freemasonry are mandated (nor forbidden) in any rendering of arms for Magnolia Lodge.

The artist who originally rendered this version of our full achievement was the late Richard McNamee Crossett, BA, FACH, MAS, SHA (Alpha Zeta Chapter of The ΠKA Fraternity at the University of Arkansas). Mr. Crossett was the preeminent North American heraldic artist of his time. He was instrumental in the devisal and original renderings of our Lodge arms, badge, banner, flag, seal and other heraldic devices.

THE COLORS AND MOTTO
The three colors of Magnolia Lodge are white, which is our chief livery color, green, our second, and old gold, our tertiary.

The white of the magnolia blossom was allusive to the first official color of Freemasonry, found in the badge, the white lambskin apron. Green from the green leaves surrounding the blossom, but also from the evergreen emblems of both Kappa Alpha Order and Freemasonry, as observed in the funeral rites, exemplifying a common theme of life. A theme that is characteristic of both the Kappa Alpha Order and Freemasonry, of eternal and everlasting life through the continued existence of the soul. Old gold in the matured stigmas in the center of the blossom alludes to the traditions of the Order, allusive of wisdom and treasure of experience, scholarship and alumni. Further, when the proposed alumni degree was written by Ammen and Hamilton, white and green were to be the colors of that degree.

The motto of the Lodge was derived from Francois Rabelais’ Gargantua and Pantagruel, where Worshipful Brother Echols found the refrain “Honor, Praise and Pleasure” in one translation, and it was thought that this sentiment described the Lodge’s traditions and purpose, in honoring both of our fraternal traditions.

Both of our common fraternal traditions have a central focus on the devotion to Deity. As good men, we had no fear of pleasure and take delight in our fellowship. The satirical theme of Rabelais' work is both ironic as it pokes fun at some of the medieval metaphors celebrated by the Order and the Craft and alludes to the Lee legacy as a mirror to his instructions at Washington College that we have no rules - only that we be gentlemen.

Our identity with Rabelais work is an indication of our learned origins but is not prescriptive of his philosophy except to parallel his ideal with our hope for a similar quality of fellowship among our fraternity.